Skip to content
HomeEnemasWhy I Love Putting Coffee in My Butt:…

Beware: This post, or the photos contained in this post, are gnarly. Not for the faint of heart, or those easily disgusted (which used to be me until I made peace with my poop).

Yeah… you read that right, I put coffee where the sun doesn’t shine. I don’t drink coffee, but boy oh boy, do I sure love putting some organic roast coffee up in my backside and in this article you’ll learn why & how (and will hopefully want to do it yourself).

So why would anyone in their right mind do this?

There’s many health advantages to doing this. I encourage you to Google it to learn ALL of the various ways coffee enemas or enemas in general are beneficial. Here’s one brief reason to do them: When one does a coffee enema, the coffee travels all the way up to your liver which stimulates an enzyme system in the liver called glutathione S-transferase. It can help increase activity levels by 600%-700% above normal. The enzyme reacts with free radicals that are known to cause degenerative diseases like cancer, atherosclerosis, Parkinson’s, fibromyalgia, advanced aging, etc., making the free radicals inert. Source

I started doing enemas in effort to rid my body of candida, toxins, and parasites after coming back to the US after traveling to multiple countries. When in Ecuador my boyfriend and I both tested our stool at a local lab, and found that we both had a potentially life threatening amoeba. In addition to the amoeba that we both were carrying I had a build up of yeast and fungus as well as a parasite. I felt like uncomfortable in my skin, was bloated & belchy, had a sluggish metabolism, and my digestion was in the shitter (see what I did there?).

Since doing coffee enemas regularly I have more energy, my complexion has improved, have improved my digestion, as well as withdrawing no less than 100 stones out of my gallbladder (see photos below, if you dare) and improving the way my liver and gallbladder function.

AND- Holy shit did I uncover some crazy stuff through doing enemas religiously 2-3x’s a week for 2 months straight.

I have extracted some gnarly looking parasitic things I never would have imagined my body would contain (but definitely not the worst I’ve ever seen, thank god because they can get pretty gruesome looking)… things no one in a first world country would ever have problems with, right?! WRONG.

Thanks to the standard american diet I grew up on, the traveling, growing up around animals, eating of pork, animal meats, and sashimi, being one of those dern barefoot hippies, and probably a number of other things I was bound to have these things in me.

I imagine you’re sitting there questioning “shit, do I have parasites?”

Well, I’m going to go out on a limb and even though I’m not a betting woman, I’ll bet that you do.

If you’re a living, breathing entity, who has had sexual intercourse, drank water, not washed produce before consuming it, grew up around animals, have/had a cat (see: Joe Rogan discuss crazy cat parasite),  has ever eaten animal protein or raw fish, ever walked around barefoot, traveled to another country, or has eaten a standard American diet, etc… then my guess is is you have them.

I don’t mean to sound alarmist, but it’s just life and something to NOT be scared of. And from what I learned, you’ll never fully be rid of parasites, just as you’ll never be rid of the microbes that live on your skin, you just have to learn how to manage them and frequently work on riding your body of them as much as you can.

And truthfully if you go to MOST western doctors and bring up parasites, they’re going to look at you like you have a hole in your head. Western doctors are not trained in parasites, because our society treats parasites like it’s some third world issue or an issue only animals deal with… but guess what? We’re animals too.

So parasite management is something that you have to venture into knowing that most of western society pish poshes at and ignorantly dismisses. But don’t worry, I have found a GREAT Facebook group, appropriately called Bottoms Up which is not only a great resource, but also a great way to get ongoing support through your parasite removal journey.

What does one need to get started with eradicating these pests?

Here’s most of my parasite removal essentials. I have linked below all of the products I use, I would HIGHLY recommend buying the enema bag and coffee I recommend, but of course you can do whatever you want with the rest. 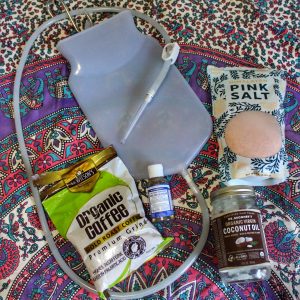 My tried and true crew:

Before I do an actual coffee enema, I like to do a water and himalayan sea salt enema, to clear out my colon so the coffee enema is free of obstructions poop.

Add water to a steel pot (aluminum or coated pots are not recommended) that is on the stove. Stir in Himalayan sea salt. Bring the temperature up so the salt dissolves, and then turn off the heat and allow it to cool to body temperature. Pour the water into enema kit, ensuring your clamp on the tube is closed. Proceed to administer (directions to do that deed will be below after directions on how to prepare the coffee enema). After you administer hold for about 15 minutes, or as close to 15 as you can. Hop on the toilet and expel. Now proceed to do a coffee enema.

Add water to a steel pot on the stove. Bring to a boil, add your coffee and boil for 3 minutes. Reduce heat, and let simmer for 15 minutes, covered. Remove from heat, and let cool to body temperature. Strain it with a fine-mesh or clothed strainer. Do not use a paper filter. Pour the solution into your enema kit, making sure the tube is clamped shut, and do the damn thing.

I go to my bathroom, and lay a towel on the floor. I bring the water & salt enema into the bathroom, and hang it securely from about 2 feet above the floor on a cabinet door next to my towel, which I will lay down on. I strip down naked, lube up the catheter with coconut oil and lay on my right side kind of in a fetal position. Then I take the catheter, insert it into my rectum, about 2-3 inches and unstop the plug. As the water begins to flow,  you may be able to feel it course throughout your colon, it’s okay you can continue to lie on your right side or switch onto your back. Be sure to have a book or your phone with you to take your mind off from it.  There will be times of feeling uncomfortable throughout this, and that’s fine- just be sure to focus on your breathing or whatever is keeping you preoccupied. And relax on the thought of doing this, this is something that is really good to do in my opinion, you’re helping your body immensely, and you’re going to get really comfortable with your body doing this- and THAT IS BEAUTIFUL.

Once the liquid has fully evacuated the enema, set an alarm on your phone for 15 minutes, clamp the tube shut, and extract the catheter.

FYI you probably won’t be able to hold it (or the coffee enema) for the full 15. That is FINE, just do what you can, and try to improve with each enema you do. I have been doing it for awhile, and still can’t hold the CE beyond 7ish minutes, and that’s totally fine, you’re still getting benefits from it.

ALWAYS make sure you are within range of the toilet in case you need to sprint to it.

Once your time is up, hop up, get on the toilet and unleash the hounds.

Pro Tip: I hit my weed vape pin prior to doing my enema, it helps me to relax throughout.

Once this is over, you can now do your coffee enema.

You don’t need to worry about rinsing your kit out, just add the coffee enema concoction into your kit and do exactly what you did with the water and salt enema.

Try to hold in until 15, but yet again, if you can’t that’s fine. Once you’re ready to get it out, get it out.

After you’re done, clean up by clamping the tube, pouring a couple drops of Dr Bronners soap into your enema kit and fill with tap water. While making sure the catheter is in the sink/tub/or hanging over the toilet bowl, unclamp the tube and allow the mixture to flow throughout the tube and open catheter. Once it’s cleared out rinse it out until you don’t see any suds in your enema kit.

NOTE: I used to rinse my enema kit out with hydrogen peroxide… sometimes I would let the hydrogen peroxide sit in the kit overnight. One time I forgot I left the peroxide in, and went about doing a water and salt enema, without rinsing the peroxide out. I WILL NEVER DO THAT AGAIN. It was awful. AWFUL. So I no longer use peroxide anymore, and I encourage no one else to use peroxide either just in the off chance that they too forget. And for the sake of repeating, IT IS AWFUL.

ALSO: Be sure to hydrate after, good ol’ fashioned high quality h2O should do just fine, but coconut water is great to use as well because it has electrolytes.

It’s important to remember, this is not a quick fix. After one coffee enema you probably won’t feel a whole lot different. But through doing it 2-3x per week, as a new lifestyle change you will feel and see it’s benefit.

TMI ALERT. Want to SEE what I have extracted?

It’s gnarly, and while I wrestled the crazy idea of placing these photos out there on the interwebs for all to see, I’m doing it.  Seeing is believing so that’s why I decided to go through with it, and if this is what it takes to someone achieve better health, so be it.

Let me reiterate for all of you who may be looking at me sideways like “girllll that stuff is just poop or food.” I encourage you to investigate more what biofilm, parasites, and candida look like AND their effects on one’s body, then take my word for it that I didn’t eat anything that could have showed up like this after being digested. THEN draw your conclusion.

In future blogs, I will share other enemas that I am doing aside from water & salt, and coffee.

And yet again, if you want to learn more I suggest you read this, and request to join the Bottoms Up group on Facebook.

Please, if you found this to be useful share with your friends or onto social media and please comment below with any questions you may have! I’m all ears.

The Monsters Inside Us- Healing from Parasites…
October 27, 2017 2 Comments