Skip to content
HomeMinimalismFrom Spoiled Brat to Minimalist- My Story &…

I grew up spoiled.

Straight up, I haven’t always been a minimalist and all “zen” like.

I grew up in a middle class household that was filled with turmoil. Reflecting upon all that had happened when I was a child, I believe I was spoiled to not only make up for my moms lack of involvement in my life but also so she could use all that she bought for me against me… ya know, in a “I do all of this for you, and you’re going to treat me like a little brat?!” sort of way.

Growing up spoiled, I inevitably grew to be an adult who consumed everything in my path.

I remember skipping college to go to Target at least twice a week to drop no less than $100 on a bunch of hodgepodge shit I didn’t need… jewelry, clothing, CDs, decorations for a home I didn’t even have. Many of the things I purchased, I never even removed the tags.

At this point in my life I was drowning.

I was in over my head in bulimia and a shopping addiction.

Not only would I buy a bunch of items I didn’t need, but I can’t even fathom how much money I wasted on purchasing a bunch of food only to purge it right back up. I was using these items and food to fill an empty void within myself, a mission that could never be accomplished by purchasing more stuff and binging on more food.

Something that severe needed oodles and loads of self love not more and more stuff.

Eventually I found that self love via personal development.

That self love took me on a crazy new life adventure. One that allowed me to end an almost 9 year relationship, pack up a good amount of my things to put in a moving truck, and move down to a furnished studio apartment in Delray Beach, Florida to live for the first time in my life on my own.

I loved my time in Delray, but unfortunately my lease was up and I was faced with two options:

I chose the latter, thus beginning my epic journey of becoming a minimalist.

I decided I was going to get rid of most of my belongings, and go see the world until I felt no longer the need to do so.

So for a week or so I committed myself to uploading pictures in local Delray Beach Facebook sales groups, trying to off as much of the clothing, shoes, workout equipment, few pieces of furniture, and such that I had.

What I didn’t manage to get rid of, I ended up taking to Goodwill or women’s shelters.

After all was said and done, I was left with a few mementos and photos/cards from when I was a child that I held onto. In this newfangled age of technology I made a very bold move- I shredded most of my photos/letters/cards AFTER taking photos of them on my smartphone. I was just at a point where I didn’t want to be tied down for anything, so I did what I felt would be the best move.

The remaining pieces of things I had left, I kept with a friend in Florida as I set off to travel the world.

This is all I have left.A suitcase, a carry on and a backpack are coming with me on my travels.The rest of my…

I left off with only a backpack and a large and small suitcase to my name. In the course of three months these items tagged along with me on trips to Thailand, Hawaii and back home to Ohio.

Throughout all of this traveling, I realize that even though I had very little to my name now, most of what I brought to wear with me I only wore about 20% of my clothing 80% of the time.

Less IS more.It's been 9 months since I sold/donated MOST of my belongings so I could travel about as I please….

I was becoming quite fed up with lugging around so much crap with me, that I decided to bail on the suitcases, downsized more of my clothing and bought a large Osprey book bag to travel with. This made the load I was traveling with so much less, and my ability to travel more efficiently so much more.

After all off this downsizing and traveling to third world countries like India, Nepal, Ecuador, and Mexico I realized how very little I need to make me happy.

Seeing the poverty that runs so deep in so many other countries made me cherish what little things I had boiled my life down to. It’s hard to want a closet full of brand new clothing and high dollar shoes when you remember the faces of children who weren’t wearing shoes, and were absolutely filthy, begging for food and money.

Now that I am back from traveling and am working on settling down for some time, I am set in my minimalist ways. I don’t want to stock up on a bunch of furniture, fancy clothes, or have a large home so that I can just fill it up with a bunch of junk and waste.

I need very little to make me happy, and know that the more money I spend on crap, the less money I will have to continue to see the world, or to help other people.

If you’re looking to start of the path of becoming a minimalist, here’s some of my best suggestions: 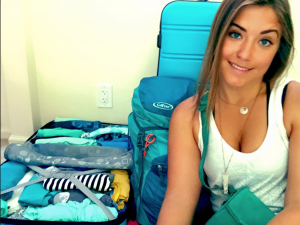 Becoming a minimalist can seem like an overwhelming, daunting task. If not mindful, our possessions end up possessing us. It can feel hard to overcome and get the monkey of consumerism and hoarding off our backs. I encourage you to start small. Don’t look at that list and try to tackle it all at once if you feel taken aback by it all. Tackle one thing at a time. If you know someone who is a minimalist or good at getting rid of things, ask them to help you with your transition. Often times someone else can come in and easily help one to minimize because they do not have the sentimental value attached to items like you might.

This error message is only visible to WordPress admins

Please go to the Instagram Feed settings page to create a feed.